When an application (e.g., a user) process wishes to set up a connection to a remote application process, it must specify which one to connect to. (Connectionless transport has the same problem: To whom should each message be sent?) The method normally used is to define transport addresses to which processes can listen for connection requests. In the Internet, these end points are called ports. In ATM networks, they are called AAL-SAPs. We will use the generic term TSAP, (Transport Service Access Point). The analogous end points in the network layer (i.e., network layer addresses) are then called NSAPs. IP addresses are examples of NSAPs.

Fig.3 illustrates the relationship between the NSAP, TSAP and transport connection. 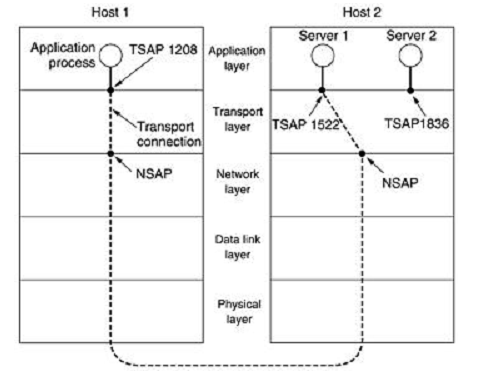 Application processes, both clients and servers, can attach themselves to a TSAP to establish a connection to a remote TSAP. These connections run through NSAPs on each host, as shown. The purpose of having TSAPs is that in some networks, each computer has a single NSAP, so some way is needed to distinguish multiple transport end points that share that NSAP.