The instruction queue filled is introduced, so that a processor should be able to fetch more than one instruction at a time from the cache. For superscalar operation, this arrangement is essential. Multiple-issue operation requires a wider path to the cache and multiple execution units. Separate execution units are provided for integer and floating-point instructions. 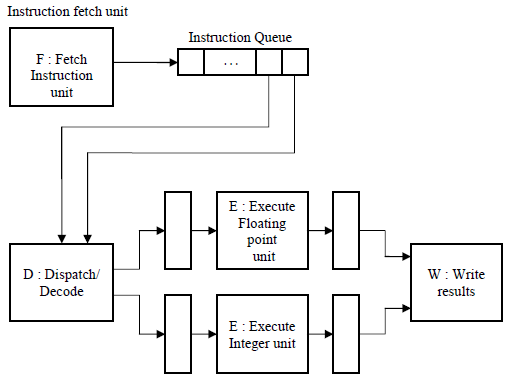 In a superscalar processor, the detrimental effect on performance of various hazards becomes even more pronounced. The compiler can avoid many hazards through judicious selection and ordering of instructions. For example, for the processor in Figure 3.19, the compiler should strive to interleave floating-point and integer instructions. This would enable the dispatch unit to keep both the integer and floating-point units busy most of the time. In general, high performance is achieved if the compiler is able to arrange program instructions to take maximum advantage of the available hardware units. 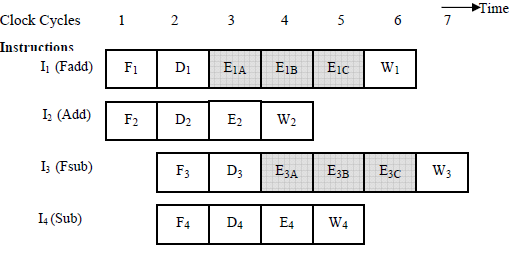 OUT-OF-ORDER EXECUTION: In Figure 8.20, instructions are dispatched in the same order as they appear in the program. However, their execution is completed out of order. Suppose one issue arise from dependencies among instructions. For example, if instruction I2 depends on the result of I1, the execution of I2 will be delayed. As long as such dependencies are handled correctly, there is no reason to delay the execution of an instruction. However, a new complication arises when we consider the possibility of an instruction causing an exception. Exceptions may be caused by a bus error during an operand fetch or by an illegal operation, such as an attempt to divide by zero. The results of I2 are written back into the register file in cycle 4. If instruction I1 causes an exception, program execution is in an inconsistent state. The program counter points to the instruction in which the exception occurred. However, one or more of the succeeding instructions have been executed to completion. If such a situation is permitted, the processor is said to have imprecise exceptions. 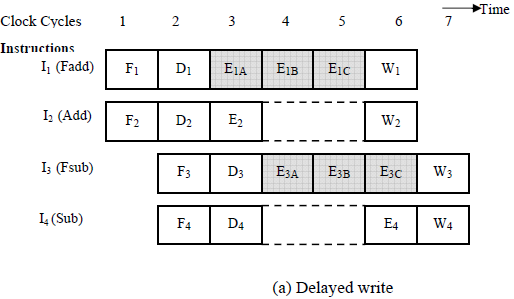 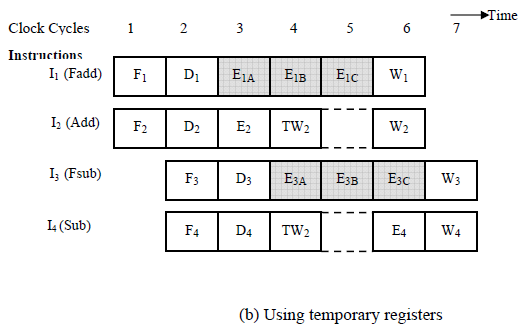 To guarantee a consistent state when exceptions occur, the results of the execution of instructions must be written into the destination locations strictly in program order. This means we must delay step W2 in Figure 8.20 until cycle 6. In turn, the integer execution unit must retain the result of instruction I2, and hence it cannot accept instruction I4 until cycle 6, as shown in Figure 8.2Ia. If an exception occurs during an instruction, all subsequent instructions that may have been partially executed are discarded. This is called a precise exception.
It is easier to provide precise exceptions in the case of external interrupts. When an external interrupt is received, the Dispatch unit stops reading new instructions from the instruction queue and the instructions remaining in the queue are discarded. All instructions whose execution is pending continue to completion. At this point, the processor and all its registers are in a consistent state, and interrupt processing can begin.