The APD is a semiconductor device that, when reverse-biased, creates strong fields in the junction region. When a photon causes an electron-hole pair, the pair flows through the junction. Because of the strong fields in the junction, the electron gains enough energy to cause secondary electron-hole pairs, which in turn cause more.
Thus a multiplication (or avalanche) process takes place (hence the name), and a
substantial current is generated from few initial photons. 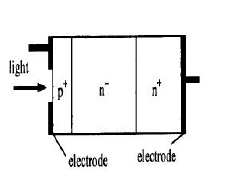 The gain M of an APD is expressed by
M = IAPD/IPrimary
where IAPD is the APD output current and Iprimary is the current due to photon-electrons conversion. However, during this multiplication process, shot noise is multiplied as well, and is estimated as
2eIM2F
where P is the APD noise factor.
If

is the effective transit time through the avalanche region, the APD bandwidth is approximated as: 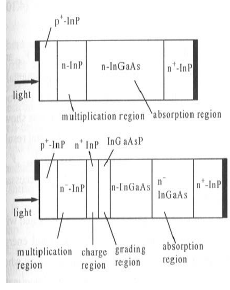