Fig. illustrates a recombination level Er which is below EF at equilibrium and therefore is substantially filled with electrons. When excess electrons and holes are created in this material, each EHP recombines at Er in two steps:

(a) hole capture and 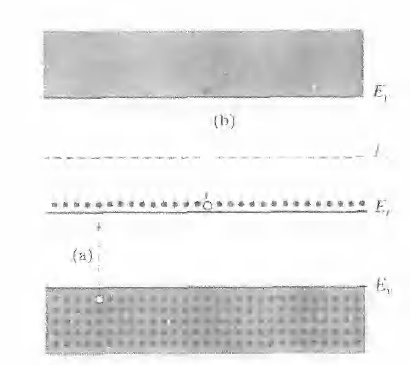 The carrier lifetime resulting from indirect recombination is somewhat more complicated than is the case for direct recombination, since it is necessary
to account for unequal times required for capturing each type of carrier. In particular, recombination is often delayed by the tendency for a captured carrier to be thermally reexcited to its original band before capture of the opposite type of carrier can occur. For example, if electron capture (b) does not follow immediately after hole capture (a) in this fig., the hole may be thermally reexcited to the valence band. Energy is required for this process, which is equivalent to a valence band electron being raised to the empty state in the recombination level. This process delays the recombination, since the hole must be captured again before recombination can be completed.

The effects of recombination and trapping can be measured by a photoconductive decay experiment.  The conductivity of the sample during the decay is

Therefore, the time dependence of the carrier concentrations can be monitored by recording the sample resistance as a function of time. A typical experimental
arrangement is shown schematically in Fig. given below. A source of short pulses of light is required, along with an oscilloscope for displaying the sample voltage as the resistance varies. Microsecond light pulses can be obtained by periodically discharging a capacitor through a flash tube containing a gas such as xenon. For shorter pulses, special techniques such as the use of a pulsed laser must be used.