In this experiment photons of selected wavelengths are directed at the sample, and relative transmission of the various photons is observed.

If a beam of photons with hv > Eg falls on a semiconductor, there will be some predictable amount of absorption, determined by the properties of the material. We would expect the ratio of transmitted to incident light intensity to depend on the photon wavelength and the thickness of the sample. To calculate this dependence, let us assume that a photon beam of intensity I0 (photons/cm2-s) is directed at a sample of thickness l. The beam contains only photons of wavelength λ, selected by a monochromator. As the beam passes through the sample, its intensity at a distance x from the surface can be calculated by considering the probability of absorption within any increment dx 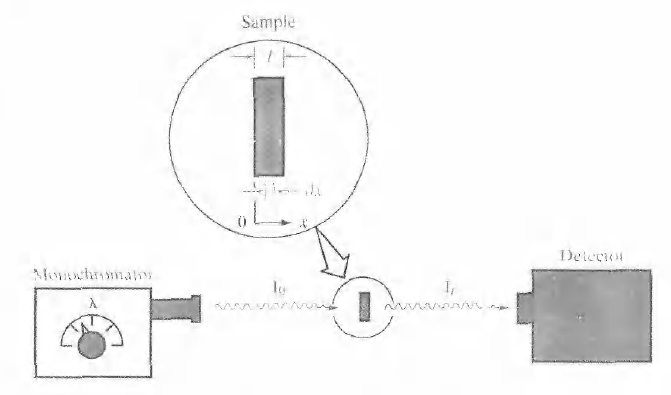 Since a photon which has survived to x without absorption has no memory of how far it has traveled, its probability of absorption in any dx is constant. Thus the degradation of the intensity -dl(x)/dx is proportional to the intensity remaining at x:

The solution to this equation is

The coefficient α is called the absorption coefficient and has units of cm-1. This coefficient will of course vary with the photon wavelength and with the material.

In a typical plot of α vs. wavelength that shown in graph below, there is negligible absorption at long wavelengths (hv small) and considerable absorption of photons with energies larger than Eg. 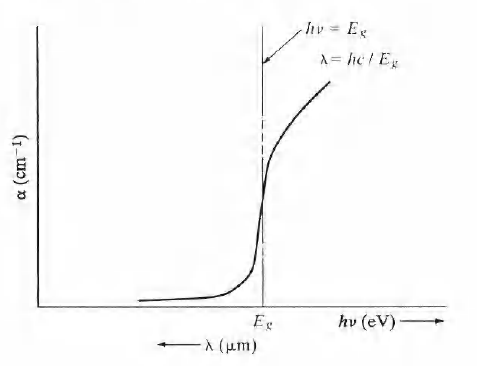