The simplest example of light emission from a semiconductor occurs for direct excitation and recombination of an EHP, as depicted as photoluminescence.

The Photoluminescence is shown in figure: 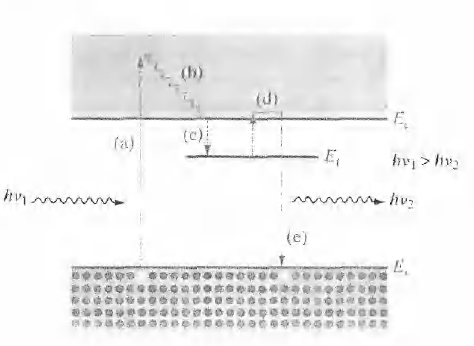 (a) An incoming photon with hv1 > Eg is absorbed, creating an EHP;

(b) the excited electron gives up energy to the lattice by scattering until it nears the bottom of the conduction band;

(c) the electron is trapped by the impurity level Er, and remains trapped until it can be thermally reexcited to the conduction band
(d); (e) finally direct recombination occurs as the electron falls to an empty state in the valence band, giving off a photon {hv2) of approximately the
band gap energy.

One of the most common examples of photoluminescence is the fluorescent lamp. Typically such a lamp is composed of a glass tube filled with gas
(e.g., a mixture of argon and mercury), with a fluorescent coating on the inside of the tube. When an electric discharge is induced between electrodes in
the tube, the excited atoms of the gas emit photons, largely in the visible and ultraviolet regions of the spectrum. This light is absorbed by the luminescent
coating, and the visible photons are emitted. The efficiency of such a lamp is considerably better than that of an incandescent bulb, and the wavelength
mixture in light given off can be adjusted by proper selection of the fluorescent material.