We emphasized the transient decay of an excess EHP population. However, the various recombination mechanisms are also important in a sample at thermal equilibrium or with a steady state EHP generation-recombination balance.

For example, a semiconductor at equilibrium experiences thermal generation of EHPs at a rate g(T) = gi This generation is balanced by the recombination rate so that the equilibrium concentrations of carriers n0 and p0 are maintained:

For steady state recombination and no trapping, Then ∂n = ∂p

The term αrn0P0 is just equal to the thermal generation rate g(T).Thus, neglecting the ∂n2 term for low-level excitation, we can rewrite the above equ

The excess carrier concentration can be written as

It is often desirable to refer to the steady state electron and hole concentrations in terms of Fermi levels, which can be included in band diagrams for various devices.The Fermi level EF is meaningful only when no excess carriers are present. However, we can write expressions for the steady state concentrations in the same form as the equilibrium expressions by defining separate quasi-Fermi levels Fn and Fp for electrons and holes. The resulting carrier concentration equations

can be considered as defining relations for the quasi-Fermi level.

Diagram of the fermi levels: 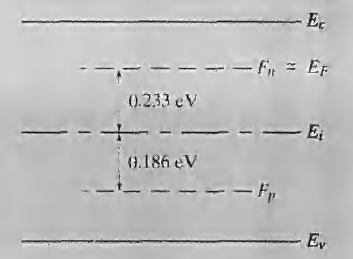 The quasi-Fermi levels illustrate dramatically the deviation from equilibrium caused by the optical excitation; the steady state Fn is only slightly above the equilibrium EF, whereas Fp is greatly displaced below EF. From the figure it is obvious that the excitation causes a large percentage change in minority carrier hole concentration and a relatively small change in the electron concentration.