Space Charge at a Junction

Within the transition region, electrons and holes are in transit from one side of the junction to the other. Some electrons diffuse from n to p, and some are
swept by the electric field from p to n (and conversely for holes); there are, however, very few carriers within the transition region at any given time, since the electric field serves to sweep out carriers which have wandered into W.

For a sample of cross-sectional area A, the total uncompensated charge on either side of the junction is

This equation is greatly simplified within the transition region if we neglect the contribution of the carriers (p - n) to the space charge. With this approximation we have two regions of constant space charge:

The value of ξ0 can be found by integrating either part of the above equ with appropriate limits (see Fig. c) 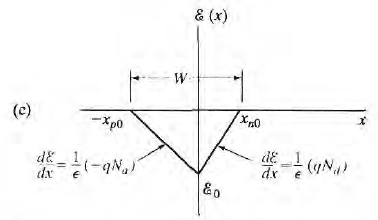 Therefore, the maximum value of the electric field is