• Enveloped data: This consists of encrypted content of any type and encrypted-content encryption keys for one or more recipients.

• Signed data: A digital signature is formed by taking the message digest of the content to be signed and then encrypting that with the private key of the signer. The content plus signature are then encoded using base64 encoding. A signed data message can only be viewed by a recipient with S/MIME capability.

• Clear-signed data: As with signed data, a digital signature of the content is formed. However, in this case, only the digital signature is encoded using base64. As a result, recipients without S/MIME capability can view the message content, although they cannot verify the signature.

S/MIME uses the following terminology, taken from RFC 2119 to specify the requirement level:

The following table summarizes the cryptographic algorithms used in S/MIME. 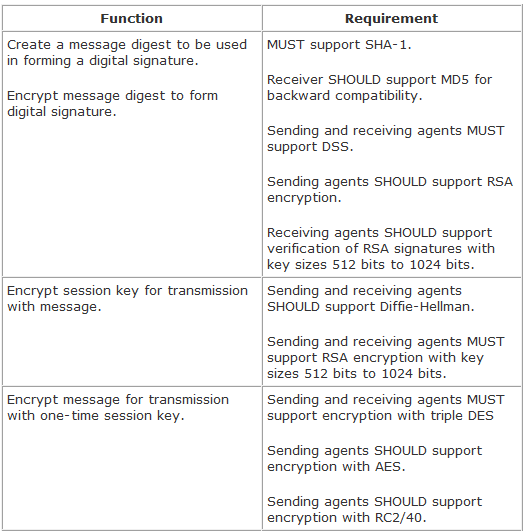 S/MIME incorporates three public-key algorithms. The Digital Signature Standard (DSS) is the preferred algorithm for digital signature. S/MIME lists Diffie-Hellman as the preferred algorithm for encrypting session keys; in fact, S/MIME uses a variant of Diffie-Hellman that does provide encryption/decryption, known as ElGamal. As an alternative, RSA, can be used for both signatures and session key encryption. These are the same algorithms used in PGP and provide a high level of security. For the hash function used to create the digital signature, the specification requires the 160-bit SHA-1 but recommends receiver support for the 128-bit MD5 for backward compatibility with older versions of S/MIME. As there is justifiable concern about the security of MD5, SHA-1 is clearly the preferred alternative.