The process of computing the attribute values of a parse tree, which is sometimes called decorating the parse tree. If all attributes were inherited, this could proceed in a completely top-down order, from the root to the leaves. Alternatively, it could proceed in a completely bottomup order, from the leaves to the root, if all the attributes were synthesized.Because our grammar has both synthesized and inherited attributes, the evaluation process cannot be in any single direction. The following is an evaluation of the attributes, in an order in which it is possible to compute them: 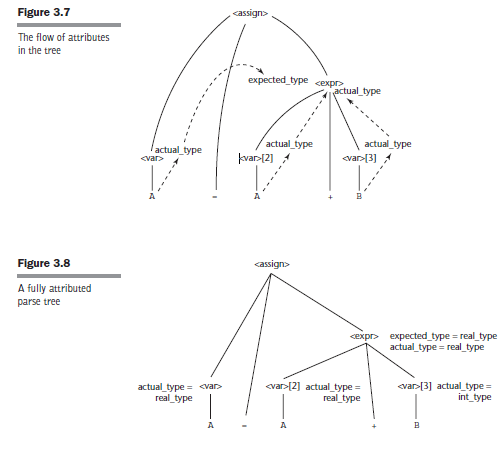 Checking the static semantic rules of a language is an essential part of all compilers. Even if a compiler writer has never heard of an attribute grammar, he or she would need to use their fundamental ideas to design the checks of static  semantics rules for his or her compiler.

One of the main difficulties in using an attribute grammar to describe all of the syntax and static semantics of a real contemporary programming language is the size and complexity of the attribute grammar. The large number of attributes and semantic rules required for a complete programming language make such grammars difficult to write and read. Furthermore, the attribute values on a large parse tree are costly to evaluate. On the other hand, less formal attribute grammars are a powerful and commonly used tool for compiler writers, who are more interested in the process of producing a compiler than they are in formalism.