Implementing arrays requires considerably more compile-time effort than does implementing primitive types. The code to allow accessing of array elements
must be generated at compile time. At run time, this code must be executed to produce element addresses. There is no way to precompute the address to be accessed by a reference such as

A single-dimensioned array is implemented as a list of adjacent memory cells. Suppose the array list is defined to have a subscript range lower bound of 0. The access function for list is often of the form

where the first operand of the addition is the constant part of the access function, and the second is the variable part.

If the element type is statically bound and the array is statically bound to storage, then the value of the constant part can be computed before run time. However, the addition and multiplication operations must be done at run time. The generalization of this access function for an arbitrary lower bound is 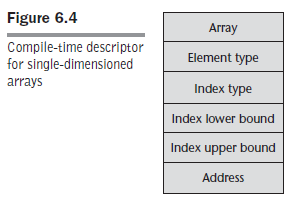 incorporated into the code that does the checking, thus eliminating the need for the run-time descriptor. If any of the descriptor entries are dynamically bound, then those parts of the descriptor must be maintained at run time. True multidimensional arrays, that is, those that are not arrays of arrays, are more complex to implement than single-dimensioned arrays, although the extension to more dimensions is straightforward. Hardware memory is linear— it is usually a simple sequence of bytes. So values of data types that have two or more dimensions must be mapped onto the single-dimensioned memory.

There are two ways in which multidimensional arrays can be mapped to one dimension: row major order and column major order.

it would be stored in row major order as

Column major order is used in Fortran, but other languages that have true multidimensional arrays use row major order.