The syntax of the relational operators for equality and in equality differs among some programming languages.  For example, for inequality, the C-based languages use !=, Ada uses /=, Lua uses ~=, Fortran 95 uses .NE. or <>, and ML and F# use <>.

JavaScript and PHP have two additional relational operators, === and !==. These are similar to their relatives, == and !=, but prevent their operands from being coerced. For example, the expression

is true in JavaScript, because when a string and a number are the operands of a relational operator, the string is coerced to a number.
However,

is false, because no coercion is done on the operands of this operator.

Ruby uses == for the equality relational operator that uses coercions, and eql? for equality with no coercions. Ruby uses === only in the when clause of its case statement.

The relational operators always have lower precedence than the arithmetic operators, so that in expressions such as

the arithmetic expressions are evaluated first.

The precedence of the arithmetic, relational, and Boolean operators in the C-based languages is as follows: 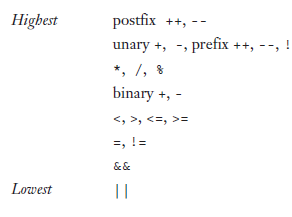 Versions of C prior to C99 are odd among the popular imperative languages in that they have no Boolean type and thus no Boolean values. Instead, numeric values are used to represent Boolean values. In place of Boolean operands, scalar variables (numeric or character) and constants are used, with zero considered false and all nonzero values considered true. The result of evaluating such an expression is an integer, with the value 0 if false and 1 if true. Arithmetic expressions can also be used for Boolean expressions in C99 and C .

One odd result of C’s design of relational expressions is that the following expression is legal:

The leftmost relational operator is evaluated first because the relational operators of C are left associative, producing either 0 or 1. Then, this result is compared with the variable c. There is never a comparison between b and c in this expression.