A Prolog term is a constant, a variable, or a structure. A constant is either an atom or an integer. Atoms are the symbolic values of Prolog and are similar to their counterparts in LISP. In particular, an atom is either a string of letters, digits, and underscores that begins with a lowercase letter or a string of any printable ASCII characters delimited by apostrophes.

A variable is any string of letters, digits, and underscores that begins with an uppercase letter or an underscore ( _ ). Variables are not bound to types by declarations. The binding of a value, and thus a type, to a variable is called an instantiation. Instantiation occurs only in the resolution process. A variable that has not been assigned a value is called uninstantiated. Instantiations last only as long as it takes to satisfy one complete goal, which involves the proof or disproof of one proposition. Prolog variables are only distant relatives, in terms of both semantics and use, to the variables in the imperative languages. The last kind of term is called a structure. Structures represent the atomic propositions of predicate calculus, and their general form is the same:

The functor is any atom and is used to identify the structure. The parameter list can be any list of atoms, variables, or other structures. As discussed at length in the following subsection, structures are the means of specifying facts in Prolog. They can also be thought of as objects, in which case they allow facts to be stated in terms of several related atoms. In this sense, structures are relations, for they state relationships among terms. A structure is also a predicate when its context specifies it to be a query.

Prolog has two basic statement forms; these correspond to the headless and headed Horn clauses of predicate calculus. The simplest form of headless Horn clause in Prolog is a single structure, which is interpreted as an unconditional assertion, or fact. Logically, facts are simply propositions that are assumed to be true.

The following examples illustrate the kinds of facts one can have in a Prolog program. Notice that every Prolog statement is terminated by a period. 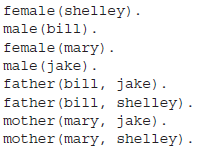 These simple structures state certain facts about jake, shelley, bill, and mary. For example, the first states that shelley is a female. The last four connect their two parameters with a relationship that is named in the functor atom; for example, the fifth proposition might be interpreted to mean that bill is the father of jake. Note that these Prolog propositions, like those of predicate calculus, have no intrinsic semantics. They mean whatever the programmer wants them to mean. For example, the proposition

The general form of the Prolog headed Horn clause statement is

It is read as follows: “consequence can be concluded if the antecedent expression is true or can be made to be true by some instantiation of its variables.” For example,

states that if mary is the mother of shelley, then mary is an ancestor of shelley. Headed Horn clauses are called rules, because they state rules of implication between propositions.