For frequency hopping spread spectrum (FHSS) systems, the carrier frequencies of the individual users are varied in a pseudorandom fashion within a wideband channel.  The digital data is broken into uniform sized bursts which are transmitted on different carrier frequencies. Instantaneous bandwidth of any one transmission burst is much smaller than the total spread bandwidth. The pseudorandom change of the carrier frequencies of the user randomizes the occupancy of a specific channel at any given time, thereby allowing for multiple accesses over a wide range of frequencies. In the FR receiver, a locally generated PN code is used to synchronize the receiver’s instantaneous frequency with that of the transmitter. At any given point in time, a frequency hopped signal only occupies a single, relatively narrow channel since narrowband FM or FSK is used. The difference between FHMA and a traditional FDMA system is that the frequency hopped signal changes channels at rapid intervals. 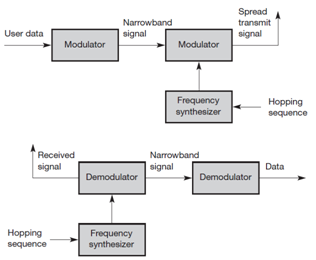 Frequency hopping receiver:receiver of an FHSS system has to know the hopping sequence and must stay synchronized. Performs the inverse operations of the modulation to reconstruct user data. Several filters are also needed 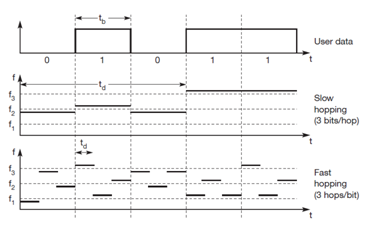