Transient Response on the Z-Plane

In order to draw equivalent conclusions on the z-plane we now map those lines through z = esT.

The vertical lines on the s-plane are lines of constant settling time and are characterized by the equation s = σ1 jω, where the real part, σ1 = —4/Ts, is constant and is in the left-half-plane for stability. Substituting this into z = esT, we obtain

= e-4/(Ts/T) . Also, Ts/T = -4/ln(r), where r is the radius of the circle of constant settling time. The horizontal lines are lines of constant peak time. The lines are characterized by the equation s = σ1 jω, where the imaginary part, ω1 =π/TP, is constant. Substituting this into z = esT, we obtain

Transforming Eq. (4) to the z-plane yields

Thus, given a desired damping ratio ζ, Eq. (5) can be plotted on the z-plane through a range of ωT as shown in Figure 1. These curves can then be used as constant percent overshoot curves on the z-plane. 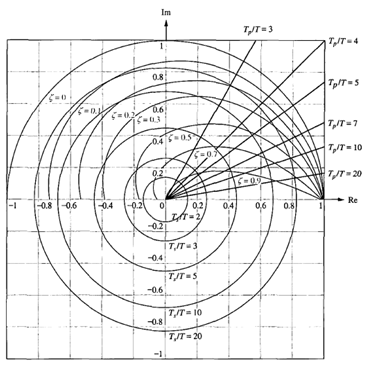 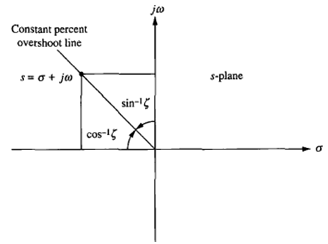