Hybrid couplers are interdigitated microstrip couplers consisting of four parallel strip lines with alternate lines tied together. A single ground plane, a single dielectric, and a single layer of metallization are used. This type of coupler, called a Lange hybrid coupler , has four ports, as shown in Figure : 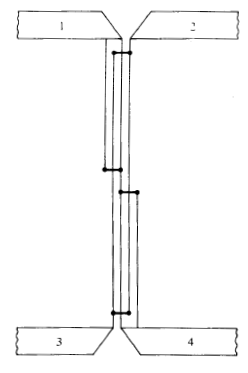 A signal wave incident in port 1 couples equal power into ports 2 and 4, but none into port 3. There are two basic types of Lange couplers: 1800 hybrids and 900 (quadrature) hybrids. The latter are also called 3-dB directional couplers. Hybrid couplers are frequently used as components in microwave systems or subsystems such as attenuators, balanced amplifiers, balanced mixers, modulators, discriminators, and phase shifters. The hybrid has a directivity of over 27 dB, a return loss of over 25 dB, an insertion loss of less than 0.13 dB, and an imbalance of less than 0.25 dB over a 40% bandwidth. In modern microwave circuit design, Lange hybrid couplers are commonly used in balanced amplifier circuitry for high-power and broad-bandwidth applications, as shown in Figure 2: 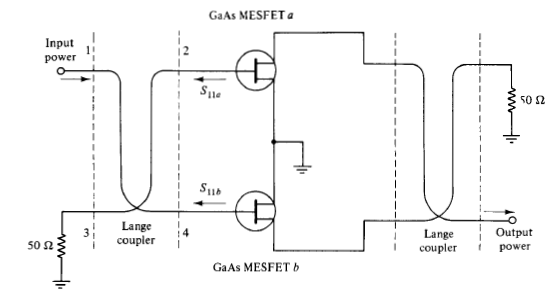 Single-stage or cascaded double-stage GaAs MESFET chips are connected in parallel to two 3-dB and 90-degree Lange hybrid couplers. Their basic relationship can be expressed by the following three equations:

where a and b indicate the two GaAs MESFET chips, and I and 2 refer to the input and output ports, respectively.