Let us describe the behavior of ferrites in the nonreciprocal phase shifter .

A nonreciprocal phase shifter consists of a thin slab of ferrite placed in a rectangular waveguide at a point where the de magnetic field of the incident wave mode is circularly polarized. Ferrite is a family of MeO . Fe2O3 , where Me is a divalent iron metal. When a piece of ferrite is affected by a dc magnetic field, the ferrite exhibits Faraday rotation. It does so because the ferrite is nonlinear material and its permeability is an asymmetric tensor, as expressed by

The relative permeability μr rchanges with the applied de magnetic field as given by :

It can be seen from above equation , that if

then μr is infinite. This phenomenon is called the gyromagnetic resonance of the ferrite. A graph of μr is plotted as a function of Hdc for longitudinal propagation in Figure 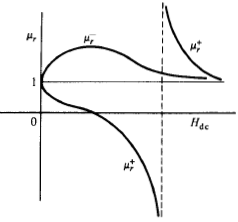