A magnetron can be built with the anode and cathode inverted-that is, with the cathode surrounding the anode. For some time, the basic problem of mode suppression prevented its use. In an inverted coaxial magnetron, the cavity is located inside a slotted cylinder, and a resonator vane array is arranged on the outside. The cathode is built as a ring around the anode. Figure  shows the schematic diagram of an inverted coaxial magnetron : 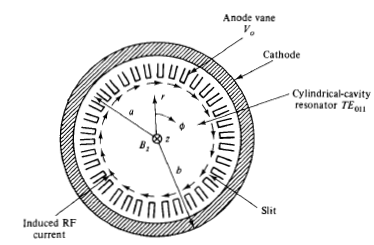 Mathematically, the motion equations of the electrons in an inverted coaxial magnetron can be written as :

Rearrangement of Eq. (2) results in the following form :

is the cyclotron angular frequency. Integration of Eq. (3) yields

The angular velocity is expressed by

Since the magnetic field does no work on the electrons, the kinetic energy of the electron is given by