The two-cavity klystron is a widely used microwave amplifier operated by the principles of velocity and current modulation. All electrons injected from the cathode arrive at the first cavity with uniform velocity. Those electrons passing the first cavity gap at zeros of the gap voltage (or signal voltage) pass through with unchanged velocity; those passing through the positive half cycles of the gap voltage undergo an increase in velocity; those passing through the negative swings of the gap voltage undergo a decrease in velocity. As a result of these actions, the electrons gradually bunch together as they travel down the drift space. The variation in electron velocity in the drift space is known as velocity modulation. The density of the electrons in the second cavity gap varies cyclically with time. The electron beam contains an ac component and is said to be current-modulated. The maximum bunching should occur approximately midway between the second cavity grids during its retarding phase; thus the kinetic energy is transferred from the electrons to the field of the second cavity. The electrons then emerge from the second cavity with reduced velocity and finally terminate at the collector. The charateristics of a two-cavity klystron amplifier are as follows :

Figure 1 shows the schematic diagram of a two-cavity klystron amplifier. The cavity close to the cathode is known as the buncher cavity or input cavity, which velocity- modulates the electron beam. The other cavity is called the catcher cavity or output cavity; it catches energy from the bunched electron beam. The beam then passes through the catcher cavity and is terminated at the collector. The quantitative analysis of a two-cavity klystron can be described in four parts under the following assumptions:

1. The electron beam is assumed to have a uniform density in the cross section of the beam.
2. Space-charge effects are negligible.
3. The magnitude of the microwave signal input is assumed to be much smaller than the de accelerating voltage.

At a frequency well below the microwave range, the cavity resonator can be represented by a lumped-constant resonant circuit. When the operating frequency is increased to several tens of megahertz, both the inductance and the capacitance must be reduced to a minimum in order to maintain resonance at the operating frequency. Ultimately the inductance is reduced to a minimum by short wire. Therefore the reentrant cavities are designed for use in klystrons and microwave triodes. A reentrant cavity is one in which the metallic boundaries extend into the interior of the cavity. Several types of reentrant cavities are shown in Fig.2. One of the commonly used reentrant cavities is the coaxial cavity shown in Fig. 3. It is clear from Fig. 9-2-4 that not only has the inductance been considerably decreased but the resistance losses are markedly reduced as well, and the shelfshielding enclosure prevents radiation losses. It is difficult to calculate the resonant frequency of the coaxial cavity. An approximation can be made, however, using transmission-line theory. The characteristic impedance of the coaxial line is given by : 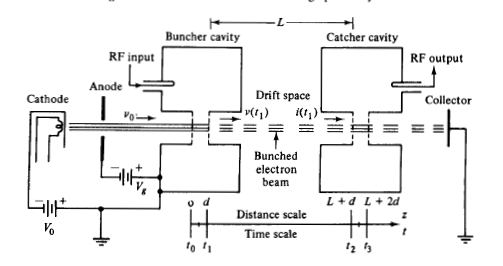