All magnetrons consist of some form of anode and cathode operated in a de magnetic field normal to a de electric field between the cathode and anode. Because of the crossed field between the cathode and anode, the electrons emitted from the cathode are influenced by the crossed field to move in curved paths. If the dc magnetic field is strong enough, the electrons will not arrive in the anode but return instead to the cathode. Consequently, the anode current is cut off. Magnetrons can be classified into three types:

1. Split-anode magnetron: This type of magnetron uses a static negative resistancebetween two anode segments.
2. Cyclotron-frequency magnetrons: This type operates under the influence ofsynchronism between an alternating component of electric field and a periodic
oscillation of electrons in a direction parallel to the field.
3. Traveling-wave magnetrons: This type depends on the interaction of electronswith a traveling electromagnetic field of linear velocity. They are customarilyreferred to simply as magnetrons

A schematic diagram of a cylindrical magnetron oscillator is shown in Fig. 1 .This type of magnetron is also called a conventional magnetron. In a cylindrical magnetron, several reentrant cavities are connected to the gaps. The de voltage Vo is applied between the cathode and the anode. The magnetic flux density Bo is in the positive z direction. When the de voltage and the magnetic flux are adjusted properly, the electrons will follow cycIoidal paths in the cathodeanode
space under the combined force of both electric and magnetic fields as shown in Fig. 2 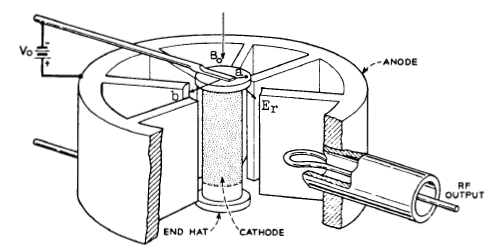 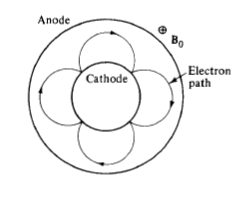 Equations of electron motion:-
The equations of motion for electrons in a cylindrical magnetron can be written as :