For broadband applications, the helix TWTs are almost exclusively used, whereas for high-average-power purposes, such as radar transmitters, the coupled-cavity TWTs are commonly used.A helix traveling-wave tube consists of an electron beam and a slow-wave structure. The electron beam is focused by a constant magnetic field along the electron beam and the slow-wave structure. This is termed an 0-type traveling-wave tube. The slow-wave structure is either the helical type or folded-back line. The applied signal propagates around the turns of the helix and produces an electric field at the center of the helix, directed along the helix axis. The axial electric field progresses with a velocity that is very close to the velocity of light multiplied by the ratio of helix pitch to helix circumference. When the electrons enter the helix tube, an interaction takes place between the moving axial electric field and the moving electrons. On the average, the electrons transfer energy to the wave on the helix. This interaction causes the signal wave on the helix to become larger. The electrons entering the helix at zero field are not affected by the signal wave; those electrons entering the helix at the accelerating field are accelerated, and those at the retarding field are decelerated. As the electrons travel further along the helix, they bunch at the collector end. The bunching shifts the phase by 7T/2. Each electron in the bunch encounters a stronger retarding field. Then the microwave energy of the electrons is delivered by the electron bunch to the wave on the helix. The amplification of the signal wave is accomplished. The characteristics of the traveling-wave tube are:

As the operating frequency is increased, both the inductance and capacitance of the resonant circuit must be decreased in order to maintain resonance at the operating frequency. Because the gain-bandwidth product is limited by the resonant circuit, the ordinary resonator cannot generate a large output. Several nonresonant periodic circuits or slow-wave structures (see Fig. 1) are designed for producing large gain over a wide bandwidth. 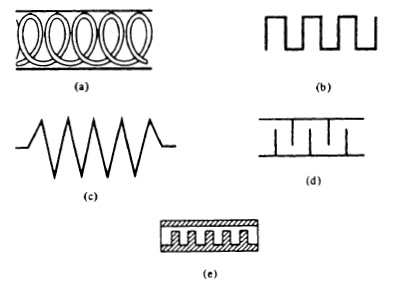 The commonly used slow-wave structure is a helical coil with a concentric conducting cylinder (see Fig. 2) .

Figure 2: Helical slow-wave structure. (a) Helical coil. (b) One turn of helix