The voltage-tunable magnetron is a broadband oscillator with frequency changed by varying the applied voltage between the anode and sole. As shown in Figure the electric beam is emitted from a short cylindrical cathode at one end of the device. Electrons are formed into a hollow beam by the electric and magnetic forces near the cathode and then are accelerated radically outward from the cathode. The electron beam is then injected into the region between the sole and the anode. The beam rotates about the sole at the rate controlled by the axial magnetic field and the dc voltage applied between the anode and the sole 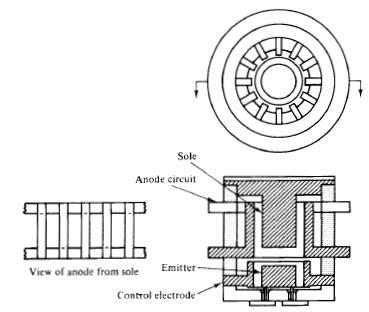 The voltage-tunable magnetron uses a low-Q resonator, and its bandwidth may exceed 50% at low-power levels. In the rr-mode operation, the bunch process of the hollow beam occurs in the resonator, and the frequency of oscillation is determined by the rotational velocity of the electron beam. In other words, the oscillation frequency can be controlled by varying the applied dc voltage between the anode and sole. Power output can be adjusted to some extent through the use of the control electrode in the electron gun. At high-power levels and high frequencies, the bandwidth percentage is limited. However, at low-power levels and low frequencies, the bandwidth may approach 70%.