From Gunn's observation the carrier drift velocity is linearly increased from zero to a maximum when the electric field is varied from zero to a threshold value.
When the electric field is beyond the threshold value of 3000 Vlcm for the n -type GaAs, the drift velocity is decrease  and the diode exhibits negative resistance. This situation is shown in Figure 1. 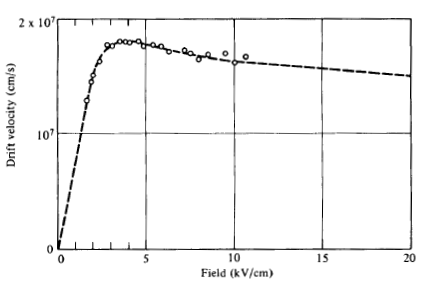 Gunn also discovered that the threshold electric field Eth varied with the length and type of material.

Many explanations have been offered for the Gunn effect. Gunn's observations were in complete agreement with the RidleyWatkins- Hilsum (RWH) theory

The fundamental concept of the Ridley-Watkins-Hilsum (RWH) theory is the differential negative resistance developed in a bulk solid-state III-V compound when either a voltage (or electric field) or a current is applied to the terminals of the sample. There are two modes of negative-resistance devices: voltage-controlled and currentcontrolled modes as shown in Fig. 2(a) and (b), respectively .

In the voltage-controlled mode the current density can be multivalued , whereas in the current-controlled mode the voltage can be multivalued. The major effect of the appearance of a differential negative-resistance region in the currentdensity- field curve is to render the sample electrically unstable. As a result, the initially homogeneous sample becomes electrically heterogeneous in an attempt to reach stability. In the voltage-controlled negative- resistance mode high-field domains are formed, separating two low-field regions. The interfaces separating lowand high-field domains lie along equipotentials; thus they are in planes perpendicular to the current direction as shown in Fig. 3(a). In the current-controlled negative-resistance mode splitting the sample results in high-current filaments running along the field direction as shown in Fig. 3(b).

Expressed mathematically, the negative resistance of the sample at a particular region is