A theoretical Read diode made of an n: -p-i-p or p -n-i-n structure has been analyzed. Its basic physical mechanism is the interaction of the impact ionization avalanche and the transit time of charge carriers. Hence the Read-type diodes are called IMPATT diodes. These diodes exhibit a differential negative resistance by two effects:

It has been confirmed that a negative resistance of the IMPATT diode can be obtained from a junction diode with any doping profile. Many IMPATT diodes consists of a high doping avalanching region followed by a drift region where the field is low enough that the carriers can traverse through it without avalanching. The Read diode is the basic type in the IMPATT diode family. The others are the one-sided abrupt p-n junction, the linearly graded p-n junction (or double-drift region), and the p-i-n diode, all of which are shown in Fig. 1. 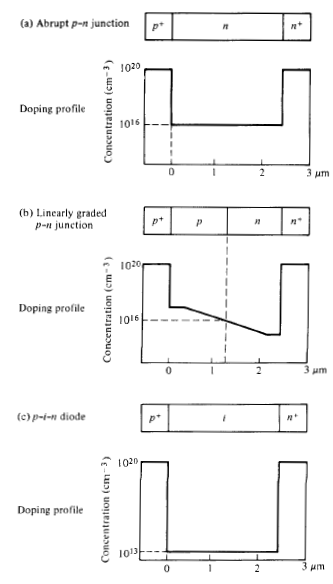 Negative Resistance :-
Small-signal analysis of a Read diode results in the following expression for the real part of the diode terminal impedance

Moreover, θ is the transit angle, given by