JFET is a unipolar field effect transistor in the form of the p-n junction gate. The various aspects related to JFET are explained below :

The n -type material is sandwiched between two highly doped layers of p -type material that is designated P . This type of device is called an n-channel JFET. If the middle part is a p -type semiconductor, the device is called a p-channel JFET. The two p -type regions in the n-channel JFET shown in Fig.1 are referred to as the gates. Each end of the n channel is joined by a metallic contact. In accordance with the directions of the biasing voltages shown in Fig. 1, the left-hand contact which supplies the source of the flowing electrons is referred to as the source, whereas the right-hand contact which drains the electrons out of the material is called the drain. The circuit symbol for an n-channel JFET is also shown in Fig. 1. The direction of the drain current Id is flowing from the drain to the device. 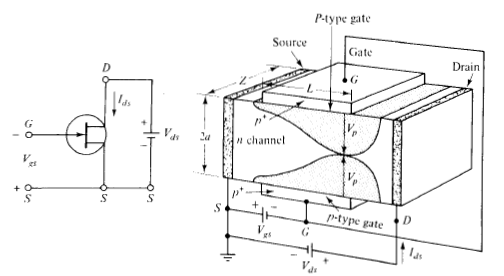 Figure 1: Schematic diagram and circuit symbol for an n-channel JFET

Under normal operating conditions, when the gate voltage Vg is zero, the drain current Id is also zero. The channel between the gate junctions is entirely open. When a small drain voltage Vd is applied between the drain and source, the n-type semiconductor bar acts as a simple resistor, and the current Id increases linearly with Vd. If a reverse gate voltage Vx is applied across the p-n gate junctions, the majority of free electrons are depleted from the channel, and the space-charge regions are extended into the channel. As the drain voltage Vd is further increased, the space-charge regions expand and join together, so that all free electron carriers are completely depleted in the joined region. This condition is called pinch off. When the channel is pinched off, the drain current Id remains almost constant, but the drain voltage Vd is continuously increased.

The pinch-off voltage is the gate reverse voltage that removes all the free charge from the channel. The Poisson's equation for the voltage in the n channel, in terms of the volume charge density is given by

Integration of Eq. (1) once and application of the boundary condition of the electric field