If the field-effect transistor is constructed with a metal-semiconductor Schottky-barrier diode, the device is called a metal-semiconductor field-effect transistor
(MESFET). The material may be either silicon or gallium arsenide (GaAs), and the channel type may be either n channel or p channel. Since GaAs MEFSETs have the capability of amplifying small signals up to the frequence range of X band with low-noise figure, they have lately replaced the parametric amplifiers in airborne radar systems because the latters are complicated to fabricate and expensive to produce. The GaAs MESFET has higher electron mobility, higher electric field, and higher electron saturation drift velocity than silicon devices, so its output power is also greater. Another special feature is its lower noise figure, accounted for by its higher electron mobility. Therefore the GaAs MESFETs are very commonly used in microwave integrated circuits for high-power, low-noise, and broadband amplifier applications.

The MESFET was developed by many scientists and engineers, such as Mead  and Hooper , and it is sometimes also called the Schottky-barrier field-effect transistor.

The unipolar transistor such as a GaAs MESFET can be developed by using either the epitaxial process or the ion implantation method . Figure 1 shows schematically a simple MESFET in GaAs. 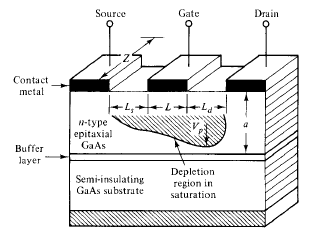 In GaAs MESFETs the substrate is doped with chromium (Cr), which has an energy level near the center of the GaAs bandgap. As Cr is the dominant impurity,
the Fermi level is pinned near the center of the bandgap. Thus, a very highresistivity substrate (near 108 ohm-em) generally results, and it is commonly called the semi-insulator GaAs substrate. On this nonconducting substrate a thin layer of lightly doped n-type GaAs is grown epitaxially to form the channel region of the field-effect transistor. In many cases a high resistivity GaAs epitaxial layer, called the buffer layer, is grown between the n-type GaAs layer and the substrate. The photolithographic process may be used to define the patterns in the metal layers such as Au-Ge for source and drain ohmic contacts and in the Al layer for the Schottky barrier-gate contact. The reason for using GaAs instead of Si is that GaAs has higher electron mobility and can operate at higher temperature and higher power.

The GaAs MESFET can also be grown by using ion implantation. A thin ntype layer can be formed at the surface of the substrate by implanting Si or a donor impurity Se from column VI of the element periodic table. However, the ion implantation process requires an anneal to remove the radiation damage. In either the fully implanted device or the epitaxial device, the source and drain contacts may be improved by further n implantation in these regions.

After the fabrication processes are completed, the individual transistor is separated from the wafer, and this discrete transistor is called a chip device. The chip device is then alloyed to a header to provide a contact to the collector region, and Au or Al wires are bonded to the metallized regions to serve as leads to the emitter and base. This bonded chip device is then named a package transistor. Figure 2 shows both the package and chip GaAs MESFET devices. 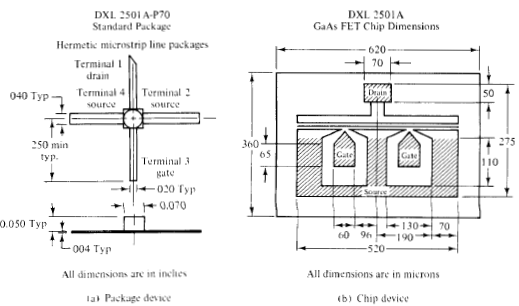