The tunneling phenomenon is a majority carrier effect. The tunneling time of carriers through the potential energy barrier is not governed by the classic transit-time concept-that the transit time is equal to the barrier width divided by the carrier velocity-but rather by the quantum transition probability per unit time. Tunnel diodes are useful in many circuit applications in microwave amplification, microwave oscillation, and binary memory because of their low cost, light weight, high speed, low-power operation, low noise, and high peak-current to valley-current ratio.

The tunnel diode is a negative-resistance semiconductor p-n junction diode. The negative resistance is created by the tunnel effect of electrons in the p-n junction. The doping of both the p and n regions of the tunnel diode is very high-impurity concentrations of 1019 to 1020 atoms/cm3 are used-and the depletion-layer barrier at the junction is very thin, on the order of 100 Ao or 10-6 cm.Classically, it is possible for those particles to pass over the barrier if and only if they have an energy equal to or greater than the height of the potential barrier. Quantum mechanically, however, if the barrier is less than 3 Ao there is an appreciable probability that particles will tunnel through the potential barrier even though they do not have enough kinetic energy to pass over the same barrier. In addition to the barrier thinness, there must also be filled energy states on the side from which particles will tunnel and allowed empty states on the other side into which particles penetrate through at the same energy level. In order to understand the tunnel effects fully, let us analyze the energy-band pictures of a heavily doped p-n diode. Figure below shows energy-band diagrams of a tunnel diode : 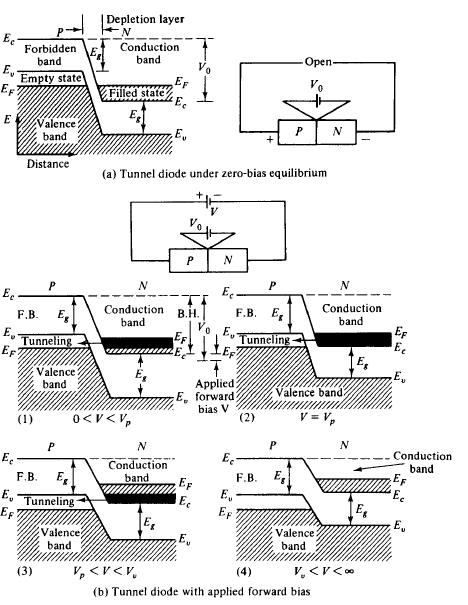