It is a high-efficiency microwave generator capable of operating from several hundred megahertz to several gigahertz. .The basic operation of the oscillator is a semiconductor p-n junction diode reversebiased to current densities well in excess of those encountered in normal avalanche operation. High-peak-power diodes are typically silicon n" -p-p" (or p -n-n ) structures with the n-type depletion region width varying from 2.5 to 12.5 μm. The doping of the depletion region is generally such that the diodes are well "punched through" at breakdown; that is, the de electric field in the depletion region just prior to breakdown is well above the saturated drift-velocity level. The device's p region is kept as thin as possible at 2.5 to 7.5 μm. The TRAPATT diode's diameter ranges from as small as 50 μm for CW operation to 750 μm at lower frequency for highpeak- power devices.

A high-field avalanche zone propagates through the diode and fills the depletion layer with a dense plasma of electrons and holes that become trapped in the low-field region behind the zone. A typical voltage waveform for the TRAPATT mode of an avalanche p -n-n diode operating with an assumed squarewave current drive is shown in Fig. 1. At point A the electric field is uniform throughout the sample and its magnitude is large but less than the value required for
avalanche breakdown. The current density is expressed by

where εs is the semiconductor dielectric permittivity of the diode.

At the instant of time at point A, the diode current is turned on. Since the only charge carriers present are those caused by the thermal generation, the diode initially charges up like a linear capacitor, driving the magnitude of the electric fieldbabove the breakdown voltage. When a sufficient number of carriers is generated, the particle current exceeds the external current and the electric field is depressed throughout the depletion region, causing the voltage to decrease. This portion of the cycle is shown by the curve from point B to point C. During this time interval the electric field is sufficiently large for the avalanche to continue, and a dense plasma of electrons and holes is created. As some of the electrons and holes drift out of the ends of the depletion layer, the field is further depressed and "traps" the remaining plasma. The voltage decreases to point D. A long time is required to remove the plasma because the total plasma charge is large compared to the charge per unit time in the external current. At point E the plasma is removed, but a residual charge of electrons remains in one end of the depletion layer and a residual charge of holes in the other end. As the residual charge is removed, the voltage increases from point E to point F. At point F all the charge that was generated internally has been removed. This charge must be greater than or equal to that supplied by the external current; otherwise the voltage will exceed that at point A. From point F to point G the diode charges up again like a fixed capacitor. At point G the diode current goes to zero for half a period and the voltage remains constant at VA until the current comes back on and the cycle repeats. 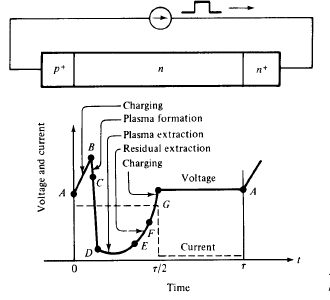 The electric field can be expressed as

where NA is the doping concentration of the n region and x is the distance.
Thus the value of t at which the electric field reaches Em at a given distance x into the depletion region is obtained by setting E(x, t) = Em, yielding

Differentiation of Eq. (3) with respect to time t results in

where vz is the avalanche-zone velocity.