Power is defined as the quantity of energy dissipated or stored per unit lime. The range of microwave power is divided into three categories—low power (less than 10 mW), medium power (from 10 mW to 10 W) and high power (greater than 10 W). The average power is measured while propagation in a transmission medium and is defined by

where T is the time period of the lowest frequency involved in (he signal and n cycles are considered. For a pulsed signal

is the pulse width, T is the period and fr is the pulse repetition fre- quency. The most convenient unit of power at microwaves is dBm. where

The microwave power meicr consists of a power sensor, which converts (he microwave power to heat energy. The corresponding temperature rise provides a change in the electrical parameters resulting in an output current in the low fre- quency circuitry and indicates the power. High power is often measured, espe- cially for standards and calibration purposes, using microwave calorimeters in which the temperature rise of the load provides a direct measure of the power absorbed by the load. The sensors used for power measurements are the Schottky barrier diode, bolometer and the thermocouple.

A zero-biased Schottky barrier diode is used as a square-law detector whose output is proportional to the input power. Since diode resistance is a strong function of temparature  the circuit is designed, such that the input matching is not affected by diode resistance as shown by the equivalent circuit shown in figure 1 :

The diode detectors can be used to measure power levels as low as 70 dBm .

A bolometer is a power sensor whose resistance changes with temperature as it absorbs microwave power. The two most common types of bolometer are, the barretterand the thermistor. The barretter is a short thin metallic (Platinum) wire sensor which has a positive temperature coefficient of resistance. The thermistor is a semiconductor sensor which has a negative temperature coefficient of resist- ance and can be easily mounted in microwave lines as shown in Fig. 2 due to its smaller and more compact size. The impedances of these bolometers are in the range 100-200 ohm. However, barretters are more delicate than thermistors, hence they are used only for very low power (< few mW). Medium and high power are measured with a low-power thermistor sensor, after precisely attenuating the signal. The sensitivity level of a thermistor is limited to about 20 dBm. The thermistor mount provides good impedance match, low loss, good isolation from thermal and physical shock and good shielding against energy leakage. 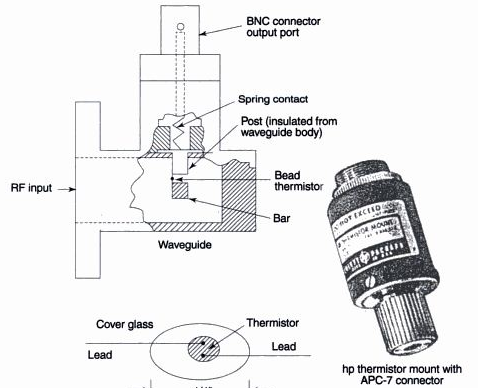