A slotted line carnage (Fig.1) contains a coaxial E field probe which pen- etrates inside a rectangular waveguide slotted section or a coaxial slotted line section from the outer wall and is able to traverse a longitudinal narrow slot. The longitudinal slot is cut along the centre of the waveguides broad wall or along the outer conductor of the coaxial line over a length of 2-3 wavelengths where the electric current on the wall does not have any transverse component. The slot should be narrow enough to avoid any distortion in the original field inside the waveguide. The two ends of the slot is tapered to zero width for reducing the effect of discontinuity. The probe is made to move longitudinally at a constant small depth to achieve a uniform coupling coefficient between the electric field inside the line and the probe current at all positions. Hie probe samples the electric field which is proportional to the probe voltage. This unit is primarily used for the determination of locations of voltage standing wave maxima and minima along the line. The probe carriage contains a stub tunable coaxial probe detector to obtain a low frequency modulating signal output to a scope or VSWR meter. The probe should be very thin compared to the wavelength and the depth also should be small enough to avoid any field distortion. 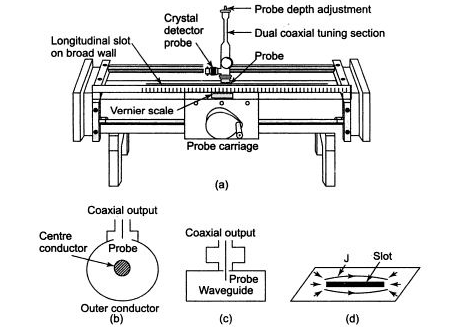 The slotted line with tunable probe detector is used to measure :-