A parallel strip line consists of two perfectly parallel strips separated by a perfect dielectric slab of uniform thickness, as shown in Figure. The plate width is w, the separation distance is d, and the relative dielectric constant of the slab is εrd. 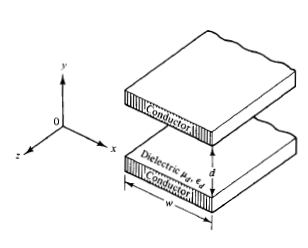 In a microwave integrated circuit a strip line can be easily fabricated on a dielectric substrate by using printed-circuit techniques. A parallel stripline is similar to a two-conductor transmission line, so it can support a quasi-TEM mode. Consider a TEM-mode wave propagating in the positive z direction in a lossless strip line (R = G = 0). The electric field is in the y direction, and the magnetic field is in the x direction. If the width w is much larger than the separation distance d, the fringing capacitance is negligible. Thus the equation for the inductance along the two conducting strips can be written as :

where μc is the permeability of the conductor. The capacitance between the two conducting strips can be expressed as

where εd is the permittivity of the dielectric slab.

where σd is the conductivity of the dielectric substrate.

The characteristic impedance of a lossless parallel strip line is

The phase velocity along a parallel strip line is