A rectangular waveguide is a hollow metallic tube with a rectangular cross section. The conducting walls of the guide confine the electromagnetic fields and thereby guide the electromagnetic wave. A number of distinct field configurations or modes can exist in waveguides. When the waves travel longitudinally down the guide, the plane waves are reflected from wall to wall. This process results in a component of either electric or magnetic field in the direction of propagation of the resultant wave; therefore the wave is no longer a transverse electromagnetic (TEM) wave. Figure ,shows that any uniform plane wave in a lossless guide may be resolved into TE and TM waves : 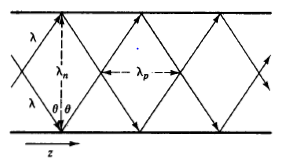 It is clear that when the wavelength A is in the direction of propagation of the incident wave, there will be one component Anin the direction normal to the reflecting plane and another Ap parallel to the plane. These components are :

A plane wave in a waveguide resolves into two components: one standing wave in the direction normal to the reflecting walls of the guide and one traveling wave in the direction parallel to the reflecting walls. In lossless waveguides the modes may be classified as either transverse electric (TE) mode or transverse magnetic (TM) mode. In rectangular guides the modes are designated TEmn or TMmn. The integer m denotes the number of half waves of electric or magnetic intensity in the x direction, and n is the number of half waves in the y direction if the propagation of the wave is assumed in the positive z direction.