Classification of fringes: we see that for superposition of two waves derived by division of amplitude, the intensity can be varied by varying the thickness of the film; varying angle of refraction (or angle of incidence ) or the wavelength of the light rays. In each of these cases, fringes of different types are obtained on screen, which can be classified into three types.

In the following section, we shall be discussing these cases.

Consider again the case of interference by division of amplitude. Let the incident light be coming from a broad source. Light from such a source will fall on thin film at all angles of incidence and on a broad range in space (different position).fig A represents the two sets of such rays falling at different angle of incidence. Correspondingly, for these rays angle of refraction will also be different. The interference phenomenon for these waves can be seen by focusing these parallel rays on a screen using a Lens. Now rays of equal angle of incidence (refraction) will come to focus on one point (say P1 ) whereas the rays with different angle of incidence will be focused at P2 . In other words each point is locus of all rays having same angle of incidence. The rays arriving at P1 (also at P2) will interfere and the resultant intensity will be governed by Eqn.

. Since in this case, the thickness of the film and the wavelength of light is same for the rays reaching at P1& P2 and the intensity variation at P1& P2 is due to variation in angle of incidence (refraction), these fringes are termed as fringes of constant inclination (FOCI). 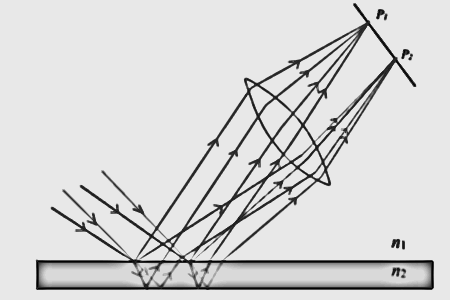 Fringes of constant thickness :     Let us now consider the case, when the thickness of the film is not constant but is varying continuously (B). If angle is small and parallel light rays from monochromatic source are made to incidence on the surface nearly normally, the two reflected rays (from upper and lower surface of the films) will have a path difference given by Eqn.(10.3.21b)

Since we are considering near normal incidence, and condition for interference maximum Eqn.(10.3.23) becomes