Diffraction by double slit: Let us see, what happens to the intensity distribution on screen when the light is allowed to pass through two narrow slits close to each other (Fig.A). In Young's double slit experiment we have seen that this arrangement will give an interference pattern comprising alternate dark and bright fringes on screen. However, in that experiment, we have assumed each of slit as behaving like point source (we did not consider the width of slit). This was equivalent to the condition that . Now from our earlier discussion in this chapter, we have seen that if , the ray bends around the sharp edge but every where (within the area of view) the waves superpose constructively and we see illumination all over.( No diffraction pattern due to either slit).

Now if the width of each slit is finite, (No longer a point source), we shall observe a combined effect of diffraction (through each slit) and interference(between light from two slits) on the screen.

At any point on screen the rays reaching from the first and second slit will have a path difference , where ‘b' is the separation between the center of two slits. 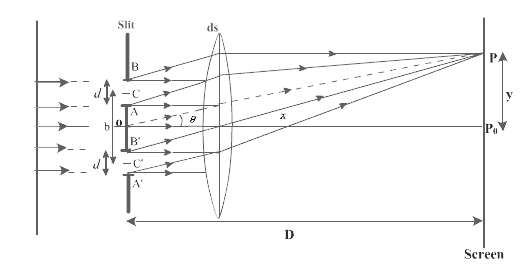 Let both slits have same width d and their separation is b ( b is distance between AA' or BB' or CC'. C & C' are mid point of each slit). Once again we wish to find the intensity at point P, which makes angle with the mid point O . Now the picture is similar to the case of single slit except that some portion (AB') of the slit BA' is blocked. Thus the secondary wave front originating from the section AB' will be blocked and will not reach screen. Let ds be small element at a distance s from the center point O . There will be a similar element at a distance - s from the point O.

In the previous lecture we had discussed the intensity distribution on screen when there was only one narrow slit in the path of light rays.

Under small angle approximation and for distance between slit and screen to be large, the amplitude of the waves reaching point P and originating from s and –s distance from O will be.

The resultant amplitude at point P for all the wavelets originating from entire slits.