Phenomena of double refraction: A randomly polarized light or two mutually orthogonal polarized lights will see the same refractive index in all the direction while propagating through the medium. Recalling the Huygen's principle, one can say that if there is a point source of light inside the medium, it will emit a spherical wave front, as shown in Fig.1, irrespective of the state of polarization. Such materials are called as isotropic medium. 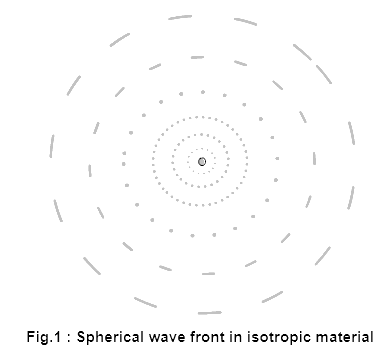 Ordinary glass is a good example of isotropic material. There are certain material for which the refractive index is different in different direction or we can say simply that the speed of propagation will not be same in all direction and also it may depend on the state of polarization. In such materials a point source may result into the elliptical wave warfront or for different polarization the wave front will be different, as shown in fig 1. Such materials are called as anisotropic material. Crystals like Quartz (SiO 2 ), calcite (CaCo 3 ) and KDP (potassium dihydrogen phosphate, KH 2 PO 4 ) are good example of anisotropic material. Such anisotropy is due to difference in the arrangement of the atoms and molecules in different direction in the crystal which leads to direction dependent polarization property of the system.

Which depends on permitivity or polarization property of the medium. The polarizibility of a medium is given by for isotropic medium,

implying that permitivity is independent of the direction. For anisotropic medium, in the simplest possible case,

When an unpolarized light (which is equivalent to the two orthogonally polarized light) falls on such crystals, different polarization will propagate through the crystal with different speed and it will result into elliptical wave front as shown in Fig 2. 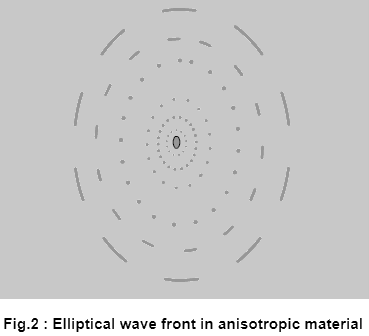 In general a crystal may exhibit three principal refrective indixcies corresponding to three mutually orthogonal axis. In some of the crystals, there may be one particular axis, say z axis such that if the light is propagating along this axis then the two mutually orthogonal waves may be same. Such axis is called as the optics axis and the crystal is termed as uniaxial crystal. In a uniaxial crystal, the propagation of light along the optics axis or along the z axis is independent of the state of polarization, just like the isotropic system. The refractive index in such situation is denoted as no. In case if the light is traveling along x (or y) direction, other than optics axis then the refractive indices will be different for two mutually orthogonal polarization. The light polarized along y direction (or x) will have refractive index no and that of along z direction it is denoted by ne accordingly the waves are called as ordinary and extraordinary rays.. Suffix e denotes the extraordinary behaviour. In other words, one can say the uniaxial crystals offers two refractive indices no and ne and hence are birefringent material.