principle of holography: Holography is a method of recording and reconstructing wavefronts residing anywhere in the electromagnetic spectrum or acoustic spectrum . This chapter addresses optical holography as practiced in or near the visible region of the electromagnetic spectrum . The principals of wavefront reconstruction were discovered by Gabor 1 – 3 in an attempt to improve the resolving power of the electron microscope . The original purpose was never accomplished , but this basic discovery evolved into one of the most significant new fields of study in this century . Gabor’s early work received little attention because the lack of a light source with suf ficient coherence severely limited the quality of the images produced . However , the invention of the laser in the early 1960s heralded a holographic renaissance . During this period , Leith and Upatnieks 4 , 5 recognized the parallels between their work in
coherent radar and Gabor’s wavefront reconstruction concepts . Their experiments in the optical region of the spectrum with the newly available HeNe laser produced the first high-quality , three-dimensional images . The publication of this work created an explosive interest in the field as well as many unrealistic predictions about what might be accomplished with holographic three-dimensional imagery . The work of numerous researchers established the medium’s true capabilities and limitations ; consequently , many successful applications ensued . Progress continues to be made in the development of new materials and techniques sustaining a high level of interest in holography and its technical , commercial , and artistic applications .

Holography is most often associated with its ability to produce striking threedimensional images . Therefore , a logical place to start in understanding holography is to compare this imaging science with its two-dimensional predecessor—photography . A light wavefront is characterized by several parameters ; the two most important of these are its intensity (or irradiance) and its local direction of propagation . Photography records only one of these parameters—intensity—in the plane of the recording medium or photographic film . The intensity distribution of a light wave emanating from an object may be recorded 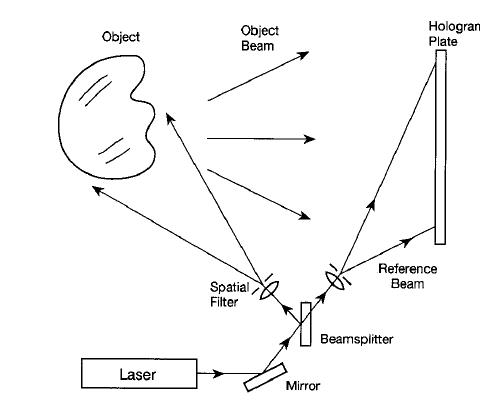 by simply exposing a film plate placed in proximity to the object ; however , this will not produce a discernible image . Recording a photograph is accomplished by imaging the object onto the film with a lens , thereby establishing a correspondence between points on the object and points in the film plane . Holography also records the intensity distribution of a wavefront ; in addition , the local propagation direction (or phase) is recorded through the process of optical interference .
The process in its simplest form is illustrated in Fig . 1 . The light from a laser is split into two parts , expanded with a short-focal-length lens (usually a microscope objective) , and spatially filtered with a pinhole to remove intensity variations caused primarily by nonuniformities in the lens . One of the split beams (object beam) is directed to the object ; the other (reference beam) is incident directly on the recording medium (such as a high-resolution silver halide film) . The light reflected from and scattered by the object combines with the reference beam at the plate to form an interference fringe field . These fringes are recorded by the film . The spacing of these fringes d is given by the grating equation.

where l is the wavelength of the light , and  q 1 and  q 2 are the angles made by the object and reference beams relative to the normal . For visible light and common recording geometries , the fringe frequency (1 / d ) can exceed 2000 fringes (or line-pairs) per millimeter . Therefore , the recording material must be of very high resolution relative to conventional photographic film which is usually in the range of 50 line-pairs per millimeter . The stability of the fringe is extremely sensitive to the mechanical motion of the object and optical components . To record holograms with good fringe stability , the optical system must be stable enough to prevent motions greater than a fraction of a wavelength . For this reason , the common practice is to use rigid optical components placed on a stable , vibration-isolated table . Illumination of the developed hologram by the reference beam alone reveals a three-dimensional image which is essentially identical to the original object as viewed in laser light . Observing the holographic image of the object is exactly like looking at the object through the window formed by the plate with full parallax and look-around capability . The object wave is reconstructed when the illumination (reference) wave is diffracted by the grating formed in the recording medium . This grating is formed by variation of the optical transmittance or optical thickness of the material along the fringe lines . The amplitude hologram formed with silver halide film may be converted to a phase hologram by bleaching ; this results in a significant increase in dif fraction ef ficiency . Other materials (such as photopolymer film) produce phase holograms directly .