Search radar with an antenna pattern proportional to cosec2 Θ, where Θ is the elevation angle, produces a constant echo-signal power for target flying at constant altitude. Fan-beam search radars generally employ this type of pattern. A cosecant squared antenna is one forming a cosecant squared beam in elevation. This beam can be generated with an array or shaped reflector antenna. 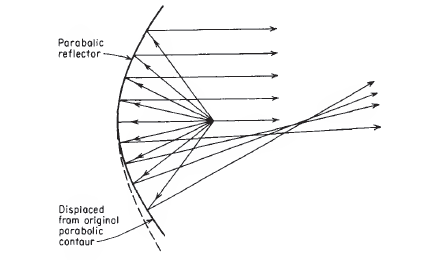 ·         The upper half of the reflector is a parabola and reflects energy from the feed in a direction parallel to the axis, as in any other parabolic antenna.

·          The lower half, however, is distorted from the parabolic contour so as to direct a portion of the energy in the upward direction.

·          A spoiler plate is sometimes used to give a cosecant squared pattern.

·         A cosecant-squared antenna pattern can also be produced by feeding the parabolic reflector with two or more horns or with a linear array.

·         If the horns are spaced and fed properly the combination of the secondary beams will give a smooth cosecant-squared pattern over some range of angle.