An energy wave generated by a transmitter is called a radio wave.The radio wave radiated into space by the transmitting antenna is a very complex form of energy containing both electric and magnetic fields. Because of this combination of fields, radio waves are also referred to as electromagnetic radiation 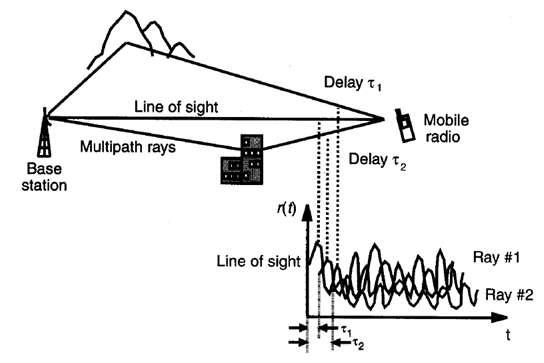 Radio waves can exhibit three fundamental propagation behaviors depending on their frequency.

Ground wave (<2 MHz): Waves with low frequencies follow the earth’s surface and can propagate long distances. These waves are used for, e.g., submarine communication or AM radio.

Sky wave (2–30 MHz): Many international broadcasts and amateur radio use these short waves that are reflected2 at the ionosphere. This way the waves can bounce back and forth between the ionosphere and the earth’s surface, travelling around the world.

Line-of-sight (>30 MHz): Mobile phone systems, satellite systems, cordless telephones etc. use even higher frequencies. The emitted waves follow a (more or less) straight line of sight. This enables direct communication with satellites (no reflection at the ionosphere) or microwave links on the ground.

There are a number of categories into which different types of radio propagation can be placed. These relate to the effects of the media through which the signals propagate

Ionospheric propagation:  Here the radio signals are modified and influenced by the action of the free electrons in the upper reaches of the earth's atmosphere called the ionosphere. This form of radio propagation is used by stations on the short wave bands for their signals to be heard around the globe. Read more about Ionosphere propagation