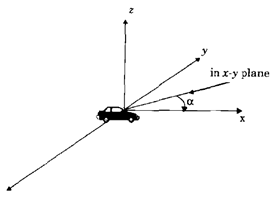 For the nth wave arriving at an angle αn to the x-axis, the Doppler shift in Hertz is given by

λ is the wavelength of the incident wave

where E0 is the real amplitude of local average E-field,Cnis a real random variable representing the amplitude of individual waves, η is the intrinsic impedance of free space (377Ω), and fcis the carrier frequency.