Diffraction occurs when the radio path between the transmitter and receiver is obstructed by a surface that has sharp irregularities (edges). 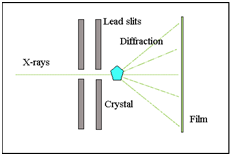 Huygen’s principle: It  states that all points on a wave front can be considered as point sources for the production of secondary wavelets, and that these 'wavelets combine to produce a new wave front in the direction of propagation. As shown in the figure 10.6 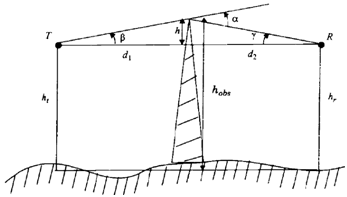 At high frequencies, diffraction, like reflection, depends on the geometry of the object, as well as the amplitude, phase, and polarization of the incident wave at the point of diffraction.

Consider a transmitter and receiver separated in free space as shown in Figure.Let an obstructing screen of effective height h with infinite width (going into and out of the paper) be placed between them at a distance d, from the transmitter and d: from the receiver.  Assuming h

The corresponding phase difference is given by