Radio waves may be reflected from various substances or objects they meet during travel between the transmitting and receiving sites. The amount of reflection depends on the reflecting material. The surface of the earth itself is a fairly good reflector. The radio wave is not reflected from a single point on the reflector but rather from an area on its surface.

Reflection occurs when a propagating electromagnetic wave impinges upon an object which has very large dimensions when compared to the wavelength of the propagating wave. Reflections occur from the surface of the earth and from buildings and walls

The intensity of the light reflected from the surface of a dielectric depends upon the index of refraction of the material, the polarization of the light, and the angle of incidence. 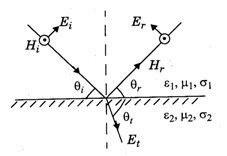 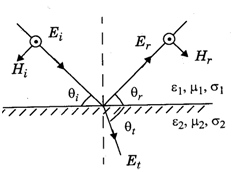 The Brewster angle occurs only for vertical (i.e. parallel) polarization

Reflection from Perfect Conductors:Since electromagnetic energy cannot pass through a perfect conductor a plane wave incident on a conductor has all of its energy reflected.As the electric field at the surface of the conductor must be equal to zero at all times in order to obey Maxwell's equations, the reflected wave must be equal in magnitude to the incident wave.For the case when E-field polarization is in the plane of incidence, the boundary conditions require that

Similarly, for the case when the E-field is horizontally polarized, the boundary conditions require that