Accessing I/O Devices.: In computing, input/output, or I/O, refers to the communication between an information processing system (computer), and the outside world. Inputs are the signals or data received by the system, and outputs are the signals or data sent from it. I/O devices are used by a person (or other system) to communicate with a computer.
Some of the input devices are keyboard, mouse, track ball, joy stick, touch screen, digital camera, webcam, image scanner, fingerprint scanner, barcode reader, microphone and so on. Some of the output devices are speakers, headphones, monitors and printers. Devices for communication between computers, such as modems and network cards, typically serve for both input and output. I/O devices can be connected to a computer through a single bus which enables the exchange of information. The bus consists of three sets of lines used to carry address, data, and control signals. Each I/O device is assigned a unique set of addresses. When the processor places a particular address on the address lines, the device that recognizes this address responds to the commands issued on the control lines. The processor requests either a read or a write operation, and the requested data are transferred over the data lines. Figure 5.1 shows the simple arrangement of I/O devices to processor and memory with single bus. 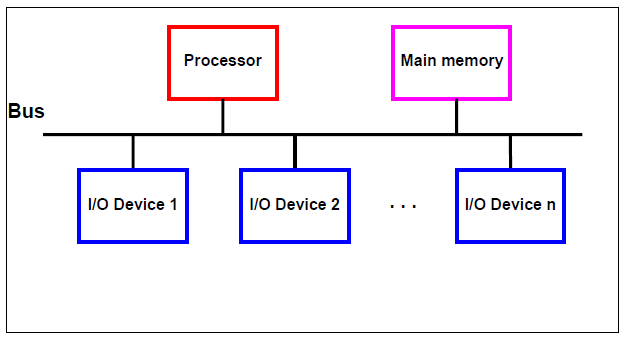 Figure 5.1 A Single bus structure
Memory-mapped I/O: The arrangement of I/O devices and the memory share the same address space is called memory-mapped I/O. With memory-mapped I/O, any machine instruction that can access memory can be used to transfer data to or from an I/O device. For example, if DATAIN is the address of the input buffer associated with the keyboard, the instruction
Move DATAIN,R0
reads the data from DATAIN and stores them into processor register RO. Similarly, the instruction
Move R0,DATAOUT
sends the contents of register R0 to location DATAOUT, which may be the output data buffer of a display unit or a printer. Most computer systems use memory-mapped I/O. Some processors have special In and Out instructions to perform I/O transfers.

Figure 5.2 illustrates the hardware required to connect an I/O device to the bus. The address decoder enables the device to recognize its address when this address appears on the address lines. The data register holds the data being transferred to or from the processor. The status register contains information relevant to the operation of the I/O device. Both the data and status registers are connected to the data bus and assigned unique addresses. The address decoder, the data and status registers, and the control circuitry required to coordinate I/O transfers constitute the device's interface circuit.


For an input device such as a keyboard, a status flag, SIN, is included in the interface circuit as part of the status register. This flag is set to 1 when a character is entered at the keyboard and cleared to 0 once this character is read by the processor. Hence, by checking the SIN flag, the software can ensure that it is always reading valid data. This is often accomplished in a program loop that repeatedly reads the status register and checks the state of SIN. When SIN becomes equal to 1, the program reads the input data register. A similar procedure can be used to control output operations using an output status flag, SOUT.