(iv) The reactance/resistance ratios of the transformers should be the same.
Condition (i)
Condition (i) is absolutely essential because wrong connections may result in dead short-circuit. Fig. (7.43 (i)) shows the correct method of connecting two
single-phase transformers in parallel. It will be seen that round the loop formed by the secondaries, the two secondary e.m.f.s EA and EB oppose and there will be no circulating current.

Fig. (7.43 (ii)) shows the wrong method of connecting two single-phase transformers is parallel. Here the two secondaries are so connected that their e.m.f.s EAand EB are additive. This may lead to short-circuit conditions and a very large circulating current will flow in the loop formed by the two secondaries. Such a condition may damage the transformers unless they are protected by fuses and circuit breakers.

Even a small difference in the induced secondary voltages can cause a large circulating current in the secondary loop because impedances of the transformers. 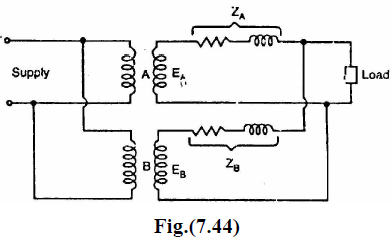