EMF Equation of transformer in electrical power transformer, one alternating electrical source is applied to the primary winding and due to this, magnetizing current flows through the primary which produces alternating flux in the core of transformer. This flux likes with both primary and secondary windings. As this flux is alternating in nature there must be a rate of change of flux. According to Faraday's law of electromagnetic induction if any coil or conductor links with any changing flux, there must be an induced emf in it. As the electric current source to primary, is sinusoidal, the flux induced by it will be also sinusoidal. Hence the function of flux may be considered as a sine function. Mathematically derivative of that function will give a function for rate of change of flux linkage with respect to time. This later function will be a cosine function since d(sinθ)/dt = cosθ.

Let, T is number of turns in a winding, Φm is the maximum flux in the core in Wb.As per Faraday's laws of electromagnetic Induction,emf,

Where φ is the instantaneous alternating flux and represented as,

This is EMF equation of transformer 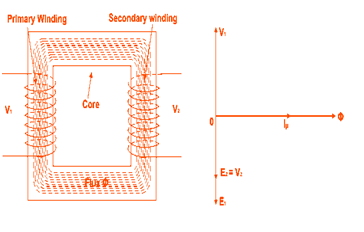