Fig. (1) shows Y-connected alternator supplying inductive load (lagging p.f.). When the load on the alternator is increased (i.e., armature current Ia is increased), the field excitation and speed being kept constant, the terminal voltage V (phase value) of the alternator decreases. This is due to

(i) Voltage drop IaRa where Ra is the armature resistance per phase.

(ii) Voltage drop IaXL where XL is the armature leakage reactance per phase.

Since the armature or stator winding has some resistance, there will be an IaRa drop when current (Ia) flows through it. The armature resistance per phase is generally small so that IaRa drop is negligible for all practical purposes.

When current flows through the armature winding, flux is set up and a part of it does not cross the air-gap and links the coil sides as shown in Fig. (2). This leakage flux alternates with current and gives the winding self-inductance. This is called armature leakage reactance. Therefore, there will be IaXL drop which is also effective in reducing the terminal voltage. 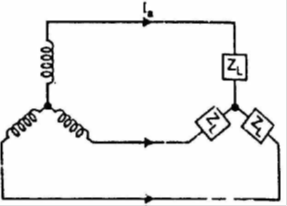 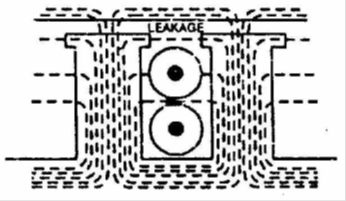 Fig. (3) shows the equivalent circuit of the loaded alternator for one phase.  All the quantities are per phase. Here

V = Terminal voltage. It is less than E by voltage drops in XL and Ra.