The armature windings in alternators are different from those used in d.c. machines. The d.c. machines have closed circuit windings but alternator windings are open, in the sense that there is no closed path for the armature currents in the winding itself. One end of the winding is joined to the neutral point and the other is brought out (for a star connected armature).

The two types of armature windings most commonly used for 3-phase alternators are: 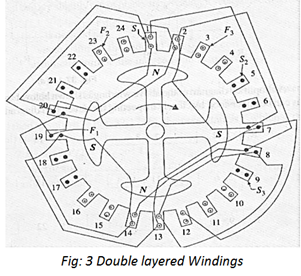 It is variously referred to as concentric or chain winding. Sometimes, it is of simple bar type or wave winding. The fundamental principle of such a winding is illustrated in Fig. 1 which shows a single-layer, one-turn, full-pitch winding for a four-pole generator. There are 12 slots in all, giving 3 slots per pole or 1 slot/phase/pole. The pole pitch is obviously 3. To get maximum e.m.f., two sides of a coil should be one pole-pitch apart i.e. coil span should be equal to one pole pitch. In other words, if one side of the coil is under the centre of a N-pole, then the, other side of the same coil should be under the centre of S-pole i.e. 180° (electrical) apart. In that case, the e.m.fs. induced in the two sides of the coil are added together. It is seen from the above figure, that R phase starts at slot No. 1, passes through slots 4, 7 and finishes at 10. The Y-phase starts 120° afterwards i.e. from slot No. 3 which is two slots away from the start of R-phase (because when 3 slots correspond to 180° electrical degrees, two slots correspond to an angular displacement of 120° electrical). It passes through slots 6, 9 and finishes at 12. Similarly, B-phase starts from slot No.5 i.e. two slots away from the start of Y-phase. It passes through slots 8, 11 and finishes at slot No. 2, The developed diagram is shown in Fig. 2. The ends of the windings are joined to form a star point for a Y-connection.

The double layer windings are the most widely used class of windings. Though both lap and wave types are possible, because of inherent problems of a wave windings, it is now an accepted practice to use the lap type for double layer ac windings. Double layer windings fall into two main classes depending upon the value of SSP-integral slot winding when SPP is an integer and fractional slot winding when SPP is a fractional number. To meet the requirement of symmetry among phases, the number of slots phase (S/3) must be a whole number.

1.       Ease in manufacture of coils and lower cost of winding

2.       Less number of coils are required as spare in the case of winding repairs

3.       Fractional slot windings can be employed