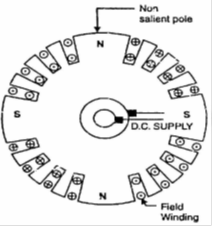 The rotor carries a field winding which is supplied with direct current through two slip rings by a separate d.c. source. This d.c. source (called exciter) is generally a small d.c. shunt or compound generator mounted on the shaft of the alternator. Rotor construction is of two types, namely;

(i) Salient (or projecting) pole type

In this type, salient or projecting poles are mounted on a large circular steel frame which is fixed to the shaft of the alternator as shown in Fig. (1). The individual field pole windings are connected in series in such a way that when the field winding is energized by the d.c. exciter, adjacent poles have opposite polarities. Low and medium-speed alternators (120-400 r.p.m.) such as those driven by diesel engines or water turbines have salient pole type rotors due to the following reasons:

(a)    The salient field poles would cause .an excessive windage loss if driven at high speed and would tend to produce noise.

(b)   Salient-pole construction cannot be made strong enough to withstand the mechanical stresses to which they may be subjected at higher speeds.

Since a frequency of 50 Hz is required, we must use a large number of poles on the rotor of slow-speed alternators. Low-speed rotors always possess a large diameter to provide the necessary spate for the poles. Consequently, salient-pole type rotors have large diameters and short axial lengths.

In this type, the rotor is made of smooth solid forged-steel radial cylinder having a number of slots along the outer periphery. The field windings are embedded in these slots and are connected in series to the slip rings through which they are energized by the d.c. exciter. The regions forming the poles are usually left unslotted as shown in Fig. (2). It is clear that the poles formed are non-salient i.e., they do not project out from the rotor surface.

High-speed alternators (1500 or 3000 r.p.m.) are driven by steam turbines and use non-salient type rotors due to the following reasons:

(a)    This type of construction has mechanical robustness and gives noiseless operation at high speeds.

(b)   The flux distribution around the periphery is nearly a sine wave and hence a better e.m.f. waveform is obtained than in the case of salient-pole type.

Since steam turbines run at high speed and a frequency of 50 Hz is required, we need a small number of poles on the rotor of high-speed alternators (also called turboalternators). We can use not less than 2 poles and this fixes the highest possible speed. For a frequency of 50 Hz, it is 3000 r.p.m. The next lower speed is 1500 r.p.m. for a 4-pole machine. Consequently, turboalternators possess 2 or 4 poles and have small diameters and very long axial lengths.