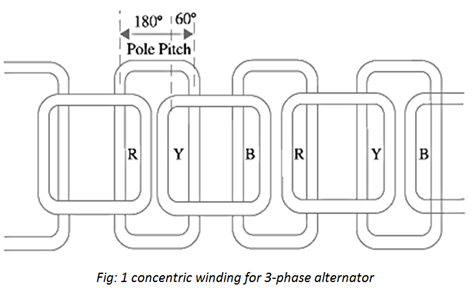 1.       It is necessary to use two different shapes of coils to avoid fouling of end connections.

2.       Since polar groups of each phase are 360 electrical degrees apart, all such groups are connected in the same direction.

3.       The disadvantage is that short-pitched coils cannot be used.

In Fig. 2 is shown a concentric winding with two coils per group per pole. Different shapes of coils are required for this winding. All coil groups of phase R are connected in the same direction. It is seen that in each group, one coil has a pitch of 5/6 and the other has a pitch of 7/6 so that pitch factor is 0.966. Such windings are used for large high-voltage machines.