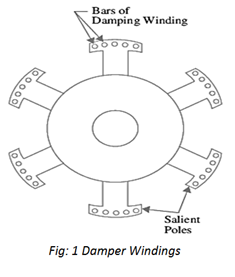 Most of the alternators have their pole-shoes slotted for receiving copper bars of a grid or damper winding (also known as squirrel-cage winding). The copper bars are short-circuited at both ends by heavy copper rings (Fig. 1). These dampers are useful in preventing the hunting (momentary speed fluctuations) in generators and are needed in synchronous motors to provide the starting torque.

Turbo-generators usually do not have these damper windings (except in special case to assist in synchronizing) because the solid field-poles themselves act as efficient dampers. It should be clearly understood that under normal running conditions, damper winding does not carry any current because rotor runs at synchronous speed. The damper winding also tends to maintain balanced 3-φ voltage under unbalanced load conditions.

Speed and Frequency of Alternator: 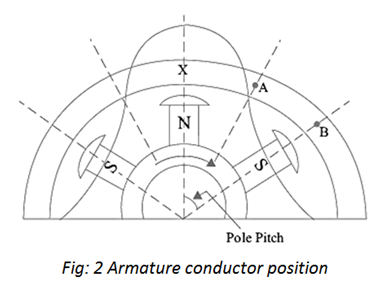 In an alternator, there exists a definite relationship between the rotational speed (N) of the rotor, the frequency (f) of the generated e.m.f. and the number of poles P. Consider the armature conductor marked X in Fig. 2 situated at the centre of a N-pole rotating in clockwise direction. The conductor being situated at the place of maximum flux density will have maximum e.m.f. induced in it. The direction of the induced e.m.f. is given by Fleming’s right hand rule. But while applying this rule, one should be careful to note that the thumb indicates the direction of the motion of the conductor relative to the field.

To an observer stationed on the clockwise revolving poles, the conductor would seem to be rotating anti-clockwise. Hence, thumb should point to the left. The direction of the induced e.m.f. is downwards, in a direction at right angles to the plane of the paper. When the conductor is in the interpolar gap, as at A in Fig. 2, it has minimum e.m.f. induced in it, because flux density is minimum there.

Again, when it is at the centre of a S-pole, it has maximum e.m.f. induced in it, because flux density at B is maximum. But the direction of the e.m.f. when conductor is over a N-pole is opposite to that when it is over a S-pole. Obviously, one cycle of e.m.f. is induced in a conductor when one pair of poles passes over it. In other words, the e.m.f. in an armature conductor goes through one cycle in angular distance equal to twice the pole-pitch, as shown in Fig. 2.

N = rotative speed of the rotor in r.p.m.

It is clear from the above that because of slow rotative speeds of engine-driven alternators, their number of poles is much greater as compared to that of the turbo-generators which run at very high speeds.