The kVA ratings of commercial alternators are very high (e.g. 500 MVA). It is neither convenient nor practicable to determine the voltage regulation by direct loading. There are several indirect methods of determining the voltage regulation of an alternator. These methods require only a small amount of power as compared to the power required for direct loading method. Two such methods are:

For either method, the following data are required: 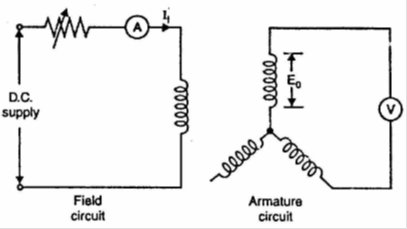 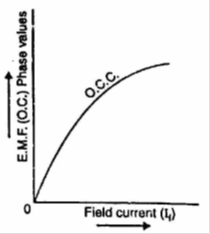 Like the magnetization curve for a d.c. machine, the (Open-circuit characteristic of an alternator is the curve between armature terminal voltage (phase value) on open circuit and the field current when the alternator is running at rated speed. Fig. 1 shows the circuit for determining the O.C.C. of an alternator. The alternator is run on no-load at the rated speed. The field current If is gradually increased from zero (by adjusting field rheostat) until open-circuit voltage E0 (phase value) is about 50% greater than the rated phase voltage. The graph is drawn between open-circuit voltage values and the corresponding values of If as shown in Fig. (2). 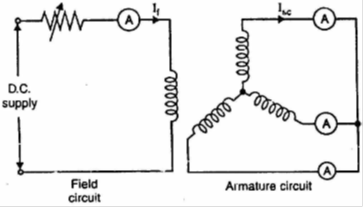 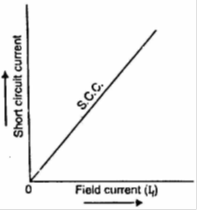 There is no need to take more than one reading because S.C.C. is a straight line passing through the origin. The reason is simple. Since armature resistance is much smaller than the synchronous reactance, the short-circuit armature current lags the induced voltage by very nearly 90°. Consequently, the armature flux and field flux are in direct opposition and the resultant flux is small. Since the resultant flux is small, the saturation effects will be negligible and the short circuit armature current, therefore, is directly proportional to the field current over the range from zero to well above the rated armature current.